The Eurovision Song Contest is the ultimate broadcast event of the year. Not only is the Eurovision one of the world’s most watched non-sports events, it is also the longest running television show in history. Ever since the first edition in 1951 the contest is becoming bigger and more spectacular by the year, as technology advances and offers all sorts of exciting new ways to ensure the Eurovision Song Contest continues to be outstanding in every way possible.

Starting in 2002 CyberMotion has been part of the technical team of various editions of the Eurovision Song Contest, including Tallinn in 2002, Helsinki in 2007, Düsseldorf in 2011, Malmö in 2013, Kyiv in 2017 and Lisbon in 2018. In addition, CyberHoist Germany was involved in the 2012 edition in Baku.

CyberMotion’s Senior Engineer Motion Joeri Swagemakers has played an important role in each of these editions of the Eurovision Song Contest, apart from the one in Baku that was handled by CyberHoist Germany. Due to the massive amount of work required to create a successful Eurovision Song Contest, CyberMotion’s preparations start as early as four months in advance, back in the headquarters in Utrecht. “This is when we receive the first rough designs for the show,” Swagemakers explains. “Based on this input we can start turning the designs into a technical plan and plan the materials we will need to bring. In this phase we learn which materials we have in stock ourselves and which materials, if any, we will need to rent from our partners, and plan the logistics accordingly. During the 2018 Eurovision Song Contest in Lisbon CyberMotion’s client Ampco Flashlight Rental used 40 CyberHoists and two MotionCue 3D desks.”

Two months in advance of the week during which the three shows of the 2018 edition took place, two semi-finals and the actual final, Swagemakers already moved to Lisbon. “Lighting designer Jerry Appelt was not only in charge of the set design, but also the lighting and motion design for each individual song. During a rock song we may have to lift objects very fast, during ballads there is generally less movement, and it’s certainly slower. During the start of these two months of intensive preparation we program these designs into the system. Then, a delegation of each country comes to review the stage design as envisioned by Jerry Appelt, and provides their feedback.”

After receiving this feedback a lot of changes were made to each aspect of the show design, motion included, until very close to the shows. “In the end, camera tech also comes into the picture and we will see the different positions from which each performance will be recorded. Some of our programmed movements will look odd from certain angles or position objects in the way of the cameras, so those have to be changed. If it turns out we need additional equipment to accommodate certain changes we will call upon the nearest partner from our network to provide it. Particularly for shows outside of the EU local partners are invaluable, so that we don’t lose time on getting our equipment through customs.”

For these two intense months of programming CyberMotion used a crew of four operators, working 24/7 with 12-hour shifts in pairs to ensure the three live shows went exactly as planned. During the shows themselves Swagemakers and Ingo Koenzen from CyberHoist Germany still had to pay close attention and ensure the preprogrammed positions for each song started at the right time. Considering the Eurovision Song Contest features an average of 43 contestants and each act tends to feature multiple changes of position, timing truly was of the essence.

“Truly, the Eurovision Song Contest is one of the toughest shows to work on. It is a challenge in every aspect, but one that we take on gladly and hope to be able to return to in the future.” 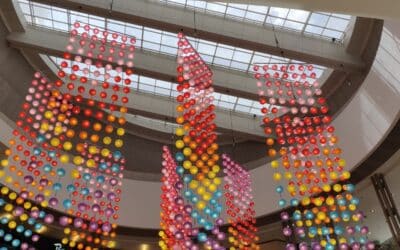